Q&A: In the Studio With Artist & Musician Ken Butler

Through the years, Made Music Studio has had the honor of collaborating with artists of all levels, from John Williams for the Super Bowl on NBC, to John Legend for a Martin Luther King, Jr. tribute, to the emerging artists we’ve connected with through Beatclub. The truth is that iconic sonic identities and immersive audio experiences like these don’t come to life without artist partnerships that inspire us and make us better creators.

One of our homegrown music partnerships was a series called In the Studio With, a concert series featuring stripped-down performances from guest artists like Bayonne and Valerie June at our New York City studio. The series was a celebration of creativity, bringing music partnerships to life in our state-of-the-art recording studio. In the age of the hybrid work model, we wondered how we could revive the series to bring fresh creative energy into our space once again. So in the spring of 2022, we reimagined In the Studio With, expanding the program to support artists of all mediums and effectively flexing our studio into a multimodal workplace.

First up in our newly reimagined In the Studio With series is internationally recognized multimedia artist and musician Ken Butler — we’re so pleased to welcome him into our studio with our first ever gallery-style exhibition. Curated by URSA Gallery, Ken Butler: Hybrid Visions highlights Ken’s experimental musical instruments created from diverse materials in the bricolage style. His work explores the interaction and transformation of common and uncommon objects, images, and sounds.

We spoke with Butler about the exhibit on view at Made Music Studio, his early interest in art and music, and the story behind what he calls a “Torso Cello.” Read on for an introduction to the world of Ken Butler.

We are thrilled to have your work on display on our studio — it’s inspiring new creative energy for us. What does it mean to you to have your hybrid musical instruments shown in an active studio space?

Of course I’m happy to have my works there, and it’s a natural fit as they certainly play off the making of music. Oddly enough, it is perhaps somewhat worrying in the sense that many expert musicians (guitarists, cellists, etc.) might look closely and realize the lack of true professional workmanship and the precise details of function aspects of instruments that a real luthier-made instrument would have, haha! Most of the ones in the show were not designed with the intent of being used for performing, the focus being on more of a poetic, transformative statement. Thanks to Made Music for the opportunity!

Were you first drawn to music or visual art, and how did they become interlaced?

I was told by my parents that as a very young child I was strongly drawn to the bass drum in a marching band, but also to reflections in pools of water and the chrome bumpers of cars, so I believe it was somewhat simultaneous. As a child I studied the viola — “Hey Mom, I like the sound of that fat violin!” — and also took a few jazz piano lessons in high school.

I suspect the visual aspect was strongest for me most of my life until I began to perform on my instruments in my 30’s. The first instrument I made bridged the two disciplines as I exhibited it as a sculpture and performed on it. In addition, early on all my performances on the hybrids incorporated slide or film projections with my imagery. 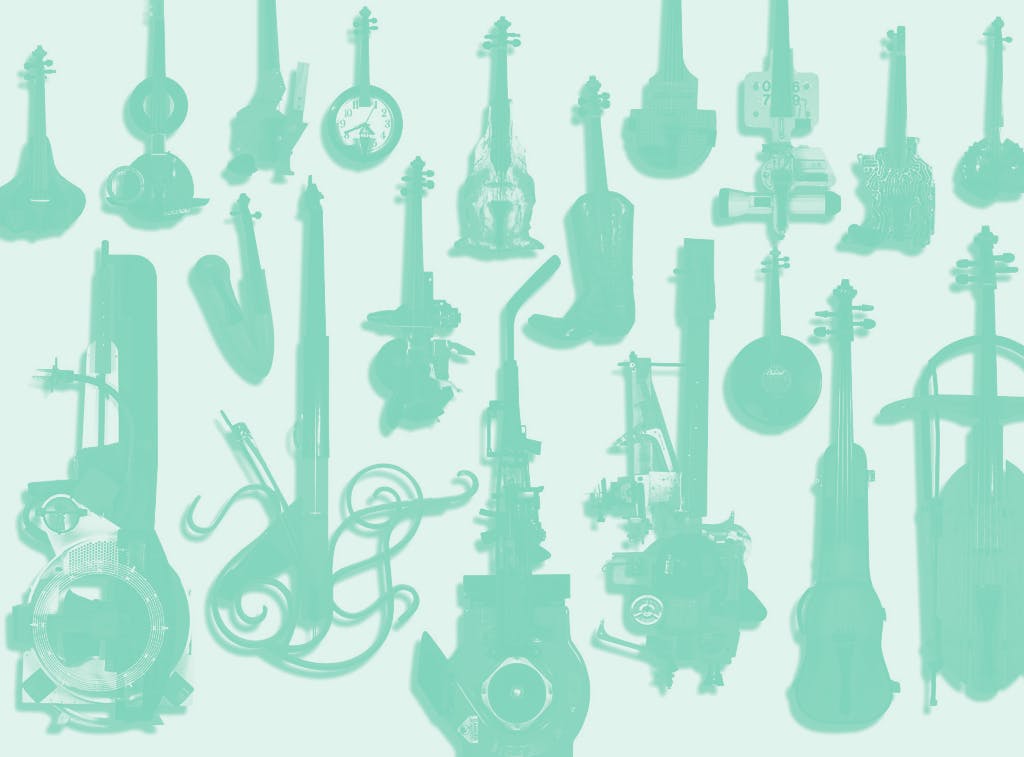 Tell us about that first instrument you created.

In 1978 I was in my basement in Portland when I saw a small hatchet left by a former tenant. Something compelled me to pull it up under my chin as though it were a violin. Immediately I imagined it as a fully functional instrument and went upstairs to see if it would perchance fit into a small violin case, which it did perfectly. I fitted a fingerboard, tailpiece, pegs, bridge, and contact microphone to the axe and was quite amazed when it sounded remarkably good played though my guitar amplifier. So I could really play my “axe.”

I was unaware at the time of the profound effect of this creation on my artistic life, initiating the idea of live performance. The Axe violin was both my first sound piece as well as sculptural object and further created the fusion of art forms I was seeking — a transformative bricolage or hybridization of form and function and cultural object identity.

Where does your mix of household, instrumental and recreational materials come from?

Most of my materials literally come from the streets of Brooklyn, which is one of the reasons I chose to move here, as there is such a storehouse of stuff for the taking everywhere. Only in a few cases did I pre-conceive the designs and seek out an appropriate object that I had in mind. I always try to embrace the unexpected. I did make friends with music stores and instrument repair shops for used necks and other parts unlikely to find on the streets, in addition to the occasional trips to junk stores and the like. 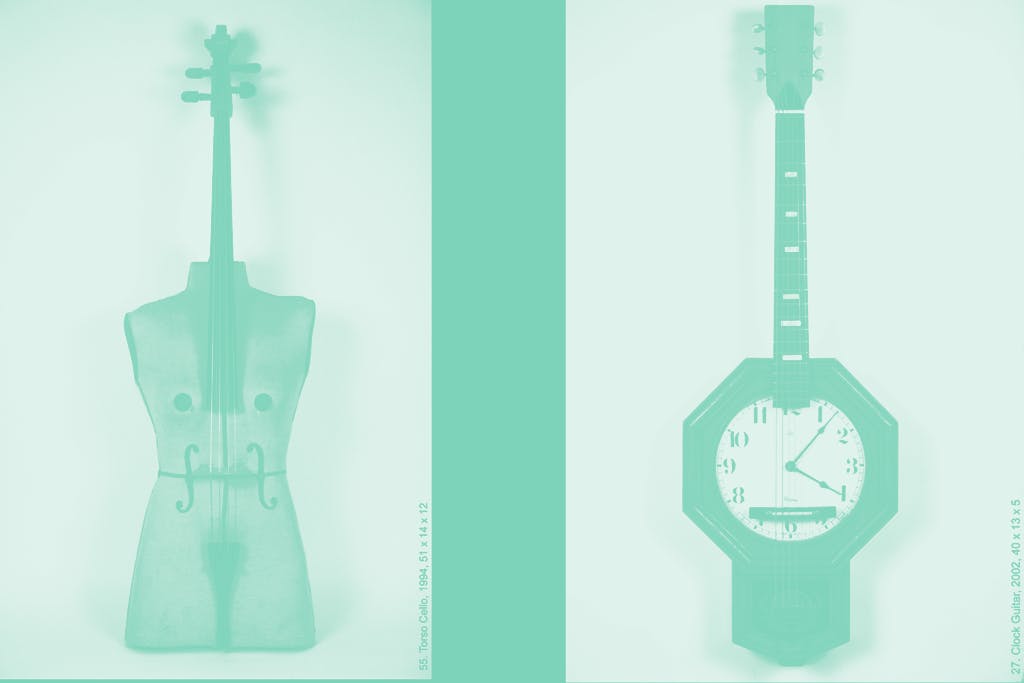 Do any of the objects carry stories with them?

The “Torso Cello” incorporates the dress form that my mother used to make clothing for herself, which I dragged out of the basement, to her chagrin. I was referencing the famous Man Ray photograph of the back of a woman’s torso to which he added f-holes, “Le Violon D’Ingres”, (which by chance recently became the world’s most expensive photo selling for $12.4 million dollars, breaking the previous record by many millions.

Do you create these instruments knowing how they will play, or is the sound they emit a surprise at the end of the construction?

The resulting sound of each instrument, and often even the playability is in a way, an “accidental” by-product of the objects that I use to create it, so yes, it is often a surprise, especially during the early years in the 80’s when I was first experimenting. The visual, sculptural, transformative, and ergonomic aspects of the hybrids always prefaces the concern for the sound — I’ve had some lucky accidents!

There are only a handful of the hundreds of hybrids that I would consider truly “playable.” Though virtually any object that can be vibrated could be considered an instrument in the right hands, no?

Ken Butler: Hybrid Visions, curated by URSA Gallery, is currently on view at Made Music Studio in New York City.

This interview has been edited for length and clarity.

Ken Butler is an artist and musician whose Hybrid musical instruments, performances and other works explore the interaction and transformation of common and uncommon objects, altered images, and diverse sounds as function and form collide in the intersection of art and music.

Butler is internationally recognized as an innovator of experimental musical instruments created from diverse materials including tools, sports equipment, and household objects. The idea of bricolage, essentially using whatever is “at hand”, is at the center of his art, encompassing a wide range of practice that combines assemblage art, live music, instrument design, performance art, theater, sculpture, installation, photography, film/video, graphic design, drawing, and collage. https://kenbutler.squarespace.com/